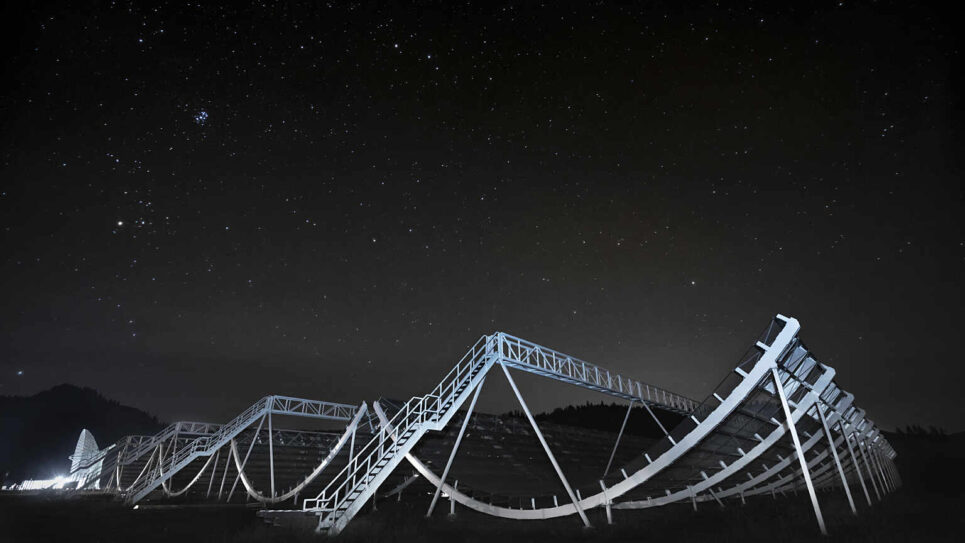 The CHIME radio telescope was under construction at the Dominion Radio Astrophysical Observatory in British Columbia, Canada, and required specialized cable assemblies with consistent velocity capabilities.

CHIME is a UBC radio telescope. It consists of fixed linear reflectors with a bridgework of many antennas at the focal plane of the reflector. There are several reflectors. The signals from each antenna are connected to a coaxial cable. These signals are cabled into a combiner. The important thing is they have to be very precise in phase. It is not much different than an optical lens where all the rays of light have to focus at the same point or the image will be fuzzy. The time the signal travels from one end of the cable to the other has to be the same for each cable, give or take 1 nanosecond. A rough definition of a nanosecond is the time it takes light to travel one foot in a vacuum.

Even with the same type of cable from the same lot, the transit time will vary, so a method had to be found to measure that time. A couple of methods were tried, and the optimum one was a network analyzer. We used an Anritsu S331E. The astronomy staff at the UBC wrote a script that allowed the cable serial number bar code, the cable loss and the electrical length of the cable to be recorded together.

Our Shleuniger automated cable cutting and the reeling machine was set up to cut these 65-meter cables very consistently, however, despite getting all our cable for that job from the same lot, a number of cables were out of tolerance and had to be re-terminated if they were too long, even though the physical length was within the specification. The short ones were repurposed.